iTunes & Stitcher subscribers! Be sure to go to the blog to read the description easier & check out links for this episode!

This month’s episode is another ReView! What is a “ReView” episode, you might ask? Well, it’s my highly-clever (ok not really) title for episodes where I go back and watch an older title I haven’t seen in a long time, and see if what I remember (and what my opinions on it) are still the same now that some time’s gone by.It’s back to school time for many of you, so what better time to watch a silly OVA about the worst school ever?! This month’s rewatch is 1988′s The Ultimate Teacher.

Other titles mentioned in this ep:
Support the work I do on this podcast by leaving me a tip on Ko-fi! Want to have your name read in the special thanks segment on the next episode? All you need to do is leave me 2 or more “coffees” on Ko-fi!

You might have noticed this episode had a sponsor as well! Check out Avane Shop for vintage toys, anime, games & collectables! Get 15% off ANY order til October 25 with coupon code ANIMENOSTALGIA at checkout! 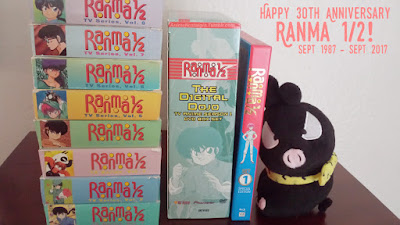 September marks the 30th Anniversary of Ranma 1/2, which first debuted as a manga in 1987 in Japan! But did you know the anime has been released in multiple formats over the years? Here’s a (very) quick look & comparison at the history of Viz’s different releases in the US! 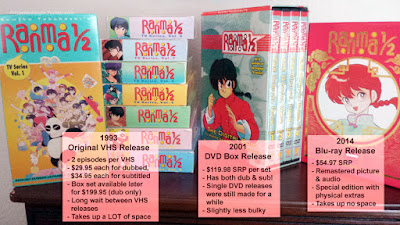 
For years, Ranma 1/2 was Viz’s flagship title, and was a popular staple in most anime & manga fan’s collections at the time. For a while, they even produced Ranma 1/2 merchandise, including mugs, t-shirts, posters, clocks, and even a personal organizer. It wasn’t until the late 90s & early 00s that Ranma was knocked out of the top spot for fan favorite, replaced by a different Rumiko Takahashi title: Inuyasha.

It took many years to dub all of Ranma 1/2. The first VHS release was in 1993, and was dubbed in the old-school, analog way. Initial releases were slow, because it took a lot of time to produce & release them. Over the years, dub actors had to be recast for several characters, but they finally finished dubbing the entire series sometime around 2003 with the release of the final DVD box set.
Unlike Viz’s original VHS release, their initial DVD sets were a co-production with Pioneer for a brief period until they started handling their own DVD & blu-ray releases in-house. Viz also released several Laserdiscs for Ranma 1/2 with Pioneer, but not the TV Series--only the Movies & OVAs.

Speaking of the OVAs & Movies, the final Ranma 1/2 bluray set with the remastered movies & OVAs was released last week! That means all of Ranma 1/2 is now finally available in the US in high definition, as well as all of the manga! Fitting that it’s during it’s anniversary month.

Happy 30th, Ranma! Still looking good, even after all these years.


If you enjoyed this little article, consider leaving me a tip of a coffee at Ko-fi! If you purchase 2 or more coffees, you get a shout in the next episode of the podcast! Thanks for reading!