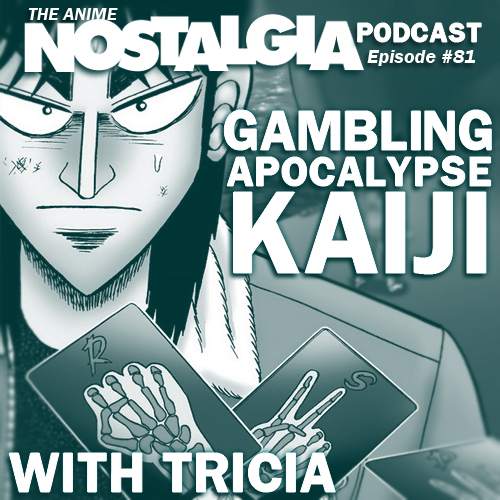 It's Thanksgiving time in North America, and what better way to celebrate than talking about a cult classic full of tears and despair?! That's right, returning guest and Fukumoto fan Tricia is back to talk with me all about Denpa's new English release of the infamous fan-favorite manga Gambling Apocalypse Kaiji! Started in the 90s, this title started growing a Western fanbase after it's '07 anime adaptation, and now at long last--a physical edition of the original manga is available! We talk about what we love about this new release, why it's worth picking up even if you've already seen the anime, and how a story with such a seemingly simple premise tackles some surprisingly heavy themes in unexpected ways. Also in this episode: what Kaiji adaptations are worth checking out, which Kaiji gambles terrify us, and why Michael Douglas is now officially Anime.

Minor corrections/updates for this episode: The ebook company that did the original eBook release is actually a company close to Mr. Fukumoto! Also, the sound effect ZAWA wasn't quite invented by Fukumoto, but popularized by him. It's derived from the Japanese ZAWATSUKU or ZAWAMEKU. And while the bubble bursting in Japan & debt has a lot to do with the themes of the story, there's also the fact that Japan went through about 15-20 years of stagflation, which lead to many being disillusioned and feeling they had no future since many jobs available were just "dead end" ones. Denpa currently has two full-time staff members, and currently only has the rights to the first arc (13 vols) of Kaiji....though that may change in the future! Thanks Denpa for reaching out and letting me know!

Support the work I do on this podcast by leaving me a tip on Ko-fi! Want to have your name read in the special thanks segment on the next episode? All you need to do is buy me 2 or more “coffees” on Ko-fi!