Debunking the Myth of Naoko Takeuchi having "no friends".

A popular “wholesome meme” that has been periodically making the rounds over the last few years is a screenshot image of the text “Let's celebrate Naoko Takeuchi. She was a struggling artist when she created Sailor Moon. 'I was at a low place, so I write about girls I wished were my friends.'”

In the age of easily shareable, bite-sized quotes on social media, it's easy to get hooked into a feel-good, wholesome meme. So of course whenever this specific image is posted, it tends to go viral and spread like wildfire. It's been shared online probably thousands of times, everywhere from Facebook to Reddit to Twitter, and people share it because, well, Sailor Moon is important to its fans, and this seems like the underdog story of the century, right???

Except that all signs point to it being not true. At all.

First, lets look at the origin of the meme. 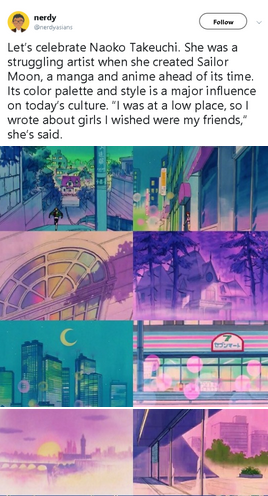 With a little bit of Google Searching, it appears that the original quote in question was posted on Twitter by an account called @NerdyAsians either on or just before July 17th, 2018. While this screenshot has no date, doing a Twitter Search for “@NerdyAsians Sailor Moon” brought up many people replying to the tweet between July 17-19th, 2018 wondering why @NerdyAsians chose to post about Naoko Takeuchi's work and not use any of her original art, but instead art from the 90s anime adaptation of her work.

The original tweet has since been deleted, as the account was either deactivated or hacked at some point, leaving it now empty.

The unsourced quote in the Tweet almost immediately started getting reposted. Google cache shows that people were linking this Tweet on other sites like Facebook at Reddit. And of course, people started screencapping the Tweet and using their own images to go with it, replacing the anime art with photos of Naoko Takeuchi instead. 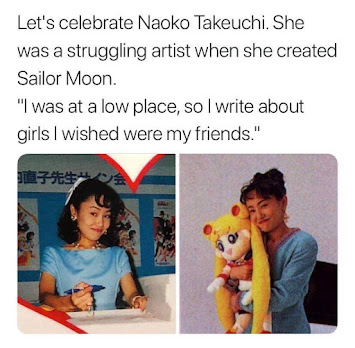 The image above turned into a truly viral image meme, which was periodically reposted and shared literally everywhere. Every few months, it seemed to pop up again; this time using a modified version of the @NerdyAsians unsourced quote insinuating that Naoko Takeuchi had no friends before she created Sailor Moon. It got around so much online that the quote was even referenced in the description of a panel held at Comic-con At Home 2020 that included actual Sailor Moon Viz English dub actresses! 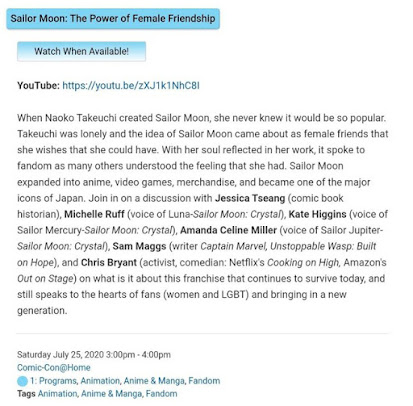 Unfortunately, as I mentioned before, the quote is never sourced anywhere because it seems to be entirely made up. I was suspicious of it from the start, as uncited quotes in viral tweets always seem to be fake. And as a Sailor Moon fan who's been around for a while, I had a hard time believing it because I'd ever heard of such a claim before....in fact, I was pretty sure that I had read something somewhere that completely contradicted that statement. So it was time to do some digging.

First of all, it's easy to find arguments to the claim that Takeuchi was a “struggling artist”. Just looking up her name on Wikipedia, you can see that not only did she have consistent and steady work at Kodansha almost as soon as she graduated from University (to become a pharmacist, no less!), but she'd also won several awards before she started on Sailor Moon, including Kodansha's 2nd New Manga Artist Award in 1986 for her debut work, Love Call. While she obviously wasn't making Sailor Moon money just yet, the fact that she was working pretty much consistently and won an award immediately after her debut work? It seems unlikely that she was struggling as badly as the quote might insinuate.

“But that doesn't mean it's entirely fake!”, you might be thinking. Sure, ok, that point could be debatable. So let's get to the biggest claim of the quote, then: That before Sailor Moon, Naoko Takeuchi was “at a low place” and had no friends.

Naoko Takeuchi is a notoriously shy and private person. She hasn't given many interviews over the years, which means she gives a lot fewer interviews than most famous manga artists. However, I remembered that back in 1996, she gave a rare interview with Animerica Magazine in vol. 4, #8 (page 7). Looking it up, I was surprised to discover that it included the following statement: 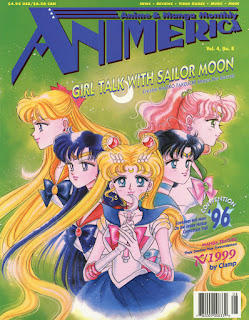 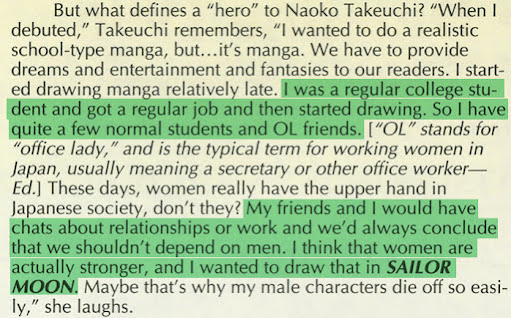 Thank you to @KaelanRamos on Twitter for the hi-res scans!

“I was a regular college student and got a regular job and then started drawing. So I have quite a few normal students and OL [office lady] friends....My friends and I would have chats about relationships or work and we'd always conclude that we shouldn't depend on men. I think that women are actually stronger, and I wanted to draw that in Sailor Moon.”

Not only does this statement seem to contradict the idea that she was struggling (she had a regular job on top of drawing manga!), but it seems hard to believe she was “in a low place” with “no friends” when she boasts having regular chats with friends! Seems like a pretty definitive answer, right?

“But she might have said the quote in a Japanese interview!”, you might be thinking. Which is fair, that's entirely possible. So lets look into interviews that were originally published in Japanese!

Long-running Sailor Moon fansite Miss Dream has collected Japanese interviews with Naoko Takeuchi over the years, carefully translating them and sharing them with fans since, as stated earlier, interviews with her in any language are just so rare. After scanning each one of the few interviews with her there, none of them include the viral quote, or even anything that remotely sounds like it. Once again, I'm coming to the conclusion that the quote just simply does not exist.

“But what if the quote came from a Japanese article that hasn't been translated into English?!”, you could argue.

Well, here's where just plain old common sense comes into play. Sure, it's entirely possible that somewhere, there could be a rare, untranslated Japanese article with Takeuchi contradicting all of these claims and giving a sad story about being lonely and friendless. But if that's the case....how did the Twitter account @NerdyAsians get a hold of it? Who did they get to translate it? And if they'd gone through all that trouble for it, why didn't they share such a mysterious and rare article with fans, knowing that interviews with Takeuchi are so rare? Why would they instead just take a quote from it and post it to Twitter with no citations or links to a fully translated article for all to read? It seems highly unlikely that the account had anything even remotely close to this, as they didn't seem to be a full fansite or news outlet, but more of an account that just liked to share things they thought were relevant to their followers.

In conclusion, with all the evidence available to us at this moment in time, I feel confident in saying that the viral quote stating Naoko Takeuchi was a struggling artist with no friends before she made Sailor Moon is completely false. I tried to post a smaller, slightly less researched version of this back on my personal Twitter account back in August of 2020, but Twitter user @Ochibawolf pointed out that it might be more helpful to have a well-worded post debunking the myth that was easily linkable to for those trying to convince others that the viral image was, in fact, fake. Thank you for the encouragement that pushed me to finally write all this up, @Ochibawolf! And hopefully this will help keep people from spreading around misinformation in the future.

If you enjoyed this writing or found it useful, consider leaving me a tip of any size on my ko-fi account here! If you tip me 2 or more “coffees”, I will give you a shout-out in the Special Thanks segment of the next episode of my podcast!