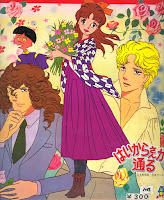 Yesterday I got to see a showing of Haikara-san: Here Comes Miss Modern (Part 1)! It’s a new movie adaptation of the classic late 70s shoujo series by Waki Yamamoto. I really enjoyed it and hope that the rest of the series of films gets a release here!

The story centers around Benio Hanamura, a girl growing up in Taisho-era Japan who wants to live free of the traditional gender roles of going to school simply to train to be “the perfect Japanese housewife”. A brash, fiercely independent (but sweet) girl, Benio would rather climb trees, practice kendo, and read modern women’s magazines than learn to sew or cook for a future husband. She wants to find love on her own terms! But all her plans come crashing down when she meets the man her father wants her to marry. Can she convince her fiance-to-be’s entire family she’s not bride material & end her arranged marriage?

The original Haikara-san is a beloved historical shoujo classic, in the same class as similar releases of the time like Candy Candy and The Rose of Versailles. It’s still playing in some select theaters around the US til June 13 2018, so be sure to check it out if you think it sounds interesting!
Posted by Dawn H. at 6/10/2018 10:00:00 AM